On Tyranny by Timothy Snyder is a very short book. Most of the time, this is a feature, not a bug.

There are plenty of non-fiction books I’ve read that definitely could’ve been much, much shorter. Books that have a good sensible idea, but one that could’ve been written on the back of a napkin instead of being expanded into an arbitrarily long form.

In the world of fiction, there’s the short story. I guess the equivelent in the non-fiction world is the essay. But On Tyranny isn’t an essay. It’s got chapters. They’re just really, really short.

Sometimes that brevity means that nuance goes out the window. What might’ve been a subtle argument that required paragraphs of pros and cons in another book gets reduced to a single sentence here. Mostly that’s okay.

The premise of the book is that Trump’s America is comparable to Europe in the 1930s:

We are no wiser than the Europeans who saw democracy yield to fascism, Nazism, or communism. Our one advantage is that we might learn from their experience.

This becomes really apparent when it comes to technology. One piece of advice offered is:

Make an effort to separate yourself from the internet. Read books.

Wait. He’s not actually saying that words on screens are in some way inherently worse than words on paper, is he? Surely that’s just the nuance getting lost in the brevity, right?

Staring at screens is perhaps unavoidable but the two-dimensional world makes little sense unless we can draw upon a mental armory that we have developed somewhere else. … So get screens out of your room and surround yourself with books.

For a book that’s about defending liberty and progress, On Tyranny is puzzingly conservative at times.

A stylesheet to imitate paper—perfect for low-fidelity prototypes that you want to test.

Running up against a paper cut bug feels a little bit like getting a physical one: not the end of the world, but certainly unpleasant. These types of tiny annoyances accrete over time, especially when no one is paying attention to them. In a single day of using my phone, I encounter dozens of these minor bugs that each annoy me just a little bit, making the task I’m trying to accomplish just a little bit more complicated.

Metaphors We Web By: Paper and Place

Out of all of these metaphors, the two most enduring are paper and physical space.

This is an intriguing idea for a content management system: write words on paper and then take a picture of the page. Artisinal retro vintage blogging.

Even if you can somehow justify using tracking technologies (which don’t work reliably) to make general, statistical decisions (“fewer people open our emails when the subject contains the word ‘overdraft’!”), you can’t make individual decisions based on them. That’s just wrong.

IRL progressive enhancement is quite common when you think of it. You can board planes with paper boarding cards, but also with technology like QR codes and digital wallets. You can pay for a coffee with cash, card or phone. The variety serves diverse sets of people. Just like in web development, not dismissing the baseline lets us cover use cases we didn’t know existed. It is fragile, though: some manager somewhere probably has a fantasy about replacing everything with fancy tech and fancy tech only.

Robin Rendle ･ Everything that books ought to be

I’m with Robin. Hardback books are infuriating, not least because of the ridiculous business model of only publishing hardback versions to begin with, and only releasing a paperback when you’ve lost all interest in reading the damn book.

The Linear Oppression of Note-taking Apps

I think this explains why Kinopio resonates with me.

A beautiful interactive visualisation of every paper published in Nature.

Keepers of the Secrets | The Village Voice

A deeply fascinating look into the world of archives and archivists:

The reason an archivist should know something, Lannon said, is to help others to know it. But it’s not really the archivist’s place to impose his knowledge on anyone else. Indeed, if the field could be said to have a creed, it’s that archivists aren’t there to tell you what’s important. Historically momentous documents are to be left in folders next to the trivial and the mundane — because who’s to say what’s actually mundane or not?

A 1992 paper by Tim Berners-Lee, Robert Cailliau, and Jean-Françoise Groff.

The W3 project is not a research project, but a practical plan to implement a global information system.

What walls are for – disambiguity

Digital things look ‘finished’ too soon. When something is a work in progress on a wall, it looks unfinished, so you keep working on it. moving things around, reshaping things, connecting things, erasing things, and making them again. Walls make it easier to iterate. Iteration, in my opinion, is massively correlated with quality.

Okay, I think I’m going to have to get this pack of three notebooks: Mercury, Gemini, and Apollo.

The first copies of Going Offline showed up today! This is my own personal stash, sent just a few days before the official shipping date of next Monday. 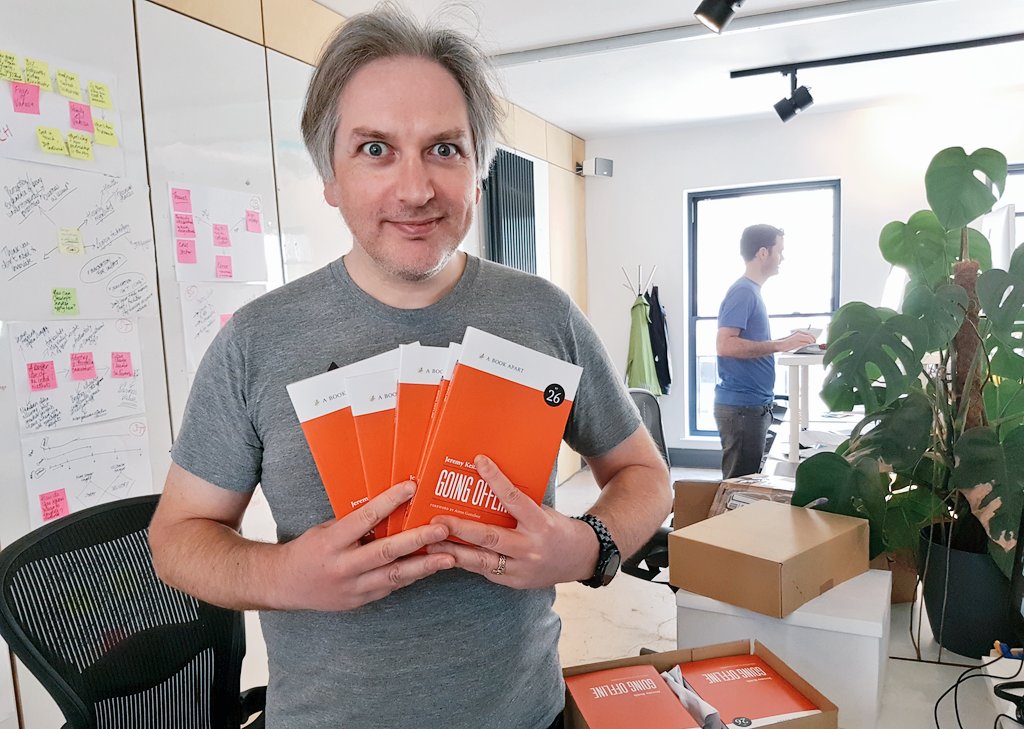 To say I was excited when I opened the box of books would be an understatement. I was positively squealing with joy!

Others in the Clearleft office shared in my excitement. Everyone did that inevitable thing, where you take a fresh-out-of-the-box book, open it up and press it against your nose. It’s like the bookworm equivalent of sniffing glue.

Actually, it basically is sniffing glue. I mean, that’s what’s in the book binding. But let’s pretend that we’re breathing in the intoxicating aroma of freshly-minted words.

If you’d like to bury your nose in a collection of my words glued together in a beautifully-designed package, you can pre-order the book now and await delivery of the paperback next week.

There’s something quite Bridlesque about these lovely books that Brendan is generating from git commits.

From the proceedings of the Electronic Computer Symposium in 1952, the remarkable Ida Rhodes describes a vision of the future…

My crystal ball reveals Mrs. Mary Jones in the living room of her home, most of the walls doubling as screens for projected art or information. She has just dialed her visiophone. On the wall panel facing her, the full colored image of a rare orchid fades, to be replaced by the figure of Mr. Brown seated at his desk. Mrs. Jones states her business: she wishes her valuable collection of orchid plants insured. Mr. Brown consults a small code book and dials a string of figures. A green light appears on his wall. He asks Mrs. Jones a few pertinent questions and types out her replies. He then pushes the start button. Mr. Brown fades from view. Instead, Mrs. Jones has now in front of her a set of figures relating to the policy in which she is interested. The premium rate and benefits are acceptable and she agrees to take out the policy. Here is Brown again. From a pocket in his wall emerges a sealed, addressed, and postage-metered envelope which drops into the mailing chute. It contains, says Brown, an application form completely filled out by the automatic computer and ready for her signature.

An interesting Xerox-PARC-like project dedicated to making a programmable platform out of paper and other physical objects.

A humane dynamic medium embraces the countless ways in which human beings use their minds and bodies, instead of cramming people into a tiny box of pixels.

Play the part of an AI pursuing its goal without care for existential threats. This turns out to be ludicrously addictive. I don’t want to tell you how long I spent playing this.

Keep your eye on the prize: remember that money (and superintelligence) is just a means to an end …and that end is making more paperclips.